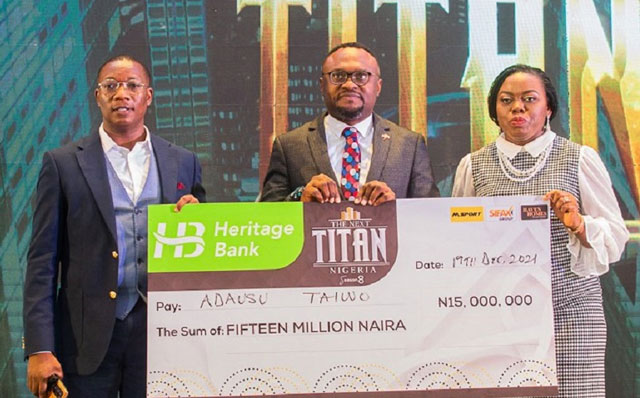 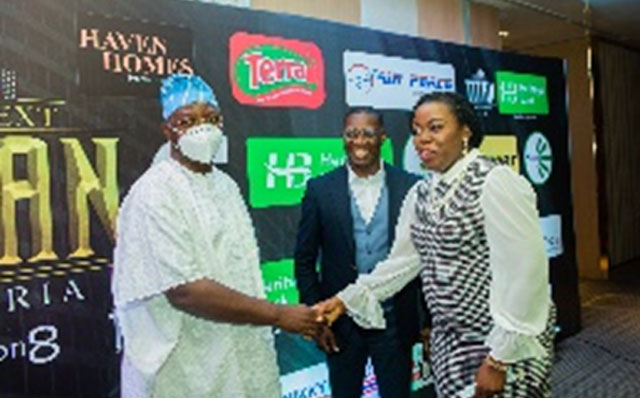 As part of her continued supports to Micro, Small and Medium Enterprises (MSMEs), Heritage Bank Plc, Nigeria’s most innovative Banking Service provider has again empowered an entrepreneur winner of The Next Titan Season-8 with sum of N15million. Adausu Emuobo Taiwo, an expert in elderly care and the brain behind Teezee Elderly Care emerged the Winner at the grand finale of The Next Titan Season-8, held yesterday in Lagos. Of the top 18 Contestants of the foremost Entrepreneurial Reality TV show tagged, “The Uncaged,” Taiwo competed with four others- Joy Badaki, Dolapo Quadri, Esin Mariah and Victor Emaye to emerge the Winner. During the premiere of the over 20, 000 participants who applied, only 18 contestants emerged of the 75 who made it through auditions from six major cities in Nigeria which are Abuja, Kano, Port Harcourt, Enugu, Ibadan, and Lagos after the Boot Camp made it into the Titan House for 10weeks to compete against top notch young entrepreneurs. Meanwhile, top 1000 contestants with good business ideas, and those whose businesses are already registered, have been shortlisted up for N3 million in funding from the Federal Ministry of Youth and Sports Development (FMYSD).

However, the Winner highly commended the headline Sponsor-Heritage Bank Plc for its continued supports to entrepreneurs and sponsorship of the Next Titan, said, “Heritage Bank is an amazing bank that has stood strong on this show. My love for Heritage Bank stems from the fact that the support would provide Teezee Home with the tools and resources to help older adults, as improved health and sanitary conditions have contributed to the rise in life expectancy. Speaking at the Grand Finale, MD/CEO of Heritage Bank, Ifie Sekibo stated that the partnership with entrepreneurs and MSMEs show the focus and strong belief of our enterprising brand in the strength of youths to possess the capacity to build robust economic in Nigeria. “The programme easily aligns with the primary focus of the management of Heritage Bank to promote every laudable entrepreneurial idea meant to broaden economic horizon of the country for the benefit of citizens and other residents of Nigeria,” he said. Sekibo represented by the Ag. Group Head, Corporate Communications, Ozena Utulu assured the contestants of Heritage bank’s readiness to leverage seamless supports to the growth of their businesses.

According to her, our doors are open; we remain your Timeless Wealth partner. He indicated that as a catalytic institution in the empowering of entrepreneurs in the micro, small and medium enterprises (MSME) sector, Heritage Bank has continued to make relentless efforts in this space to empower entrepreneurs in Nigeria through championing several empowerments. The MD also encouraged the contestants to explore the eNaira option as it is something to lookout for in business world come 2022. Speaking earlier, the Executive Producer of The Next Titan, Mide Akinlaja commended the headline sponsor- Heritage Bank and others for their partnership and supports which have positively impacted on the generality of young people who have shared their testimonies regarding the programme causing a paradigm shift in their mind-sets to moving from Jobs -Seekers to Jobs-Creators. The programme paneled by technocrats with perfect blend of entrepreneurial requisite skills trained each participant on enriching, rigorous and intellectually learning journey to equip them with the fundamental competencies required of seasoned entrepreneurs. The weekly boardroom judges are from different spectrum of entrepreneurial fields – Kyari Bukar Founder/CEO Trans-Sahara Investment; Lilian Olubi, CEO, EFG Hermes Nigeria; Chris Parkes, Chairman/CEO, CPMS Africa and Tonye Cole, Founder, Sahara Group and a guest Judge, Mrs. Olatorera Oniru, CEO, Olatorera Consultancy Ltd are top business personalists.