The Journey of a Chocolate Bar 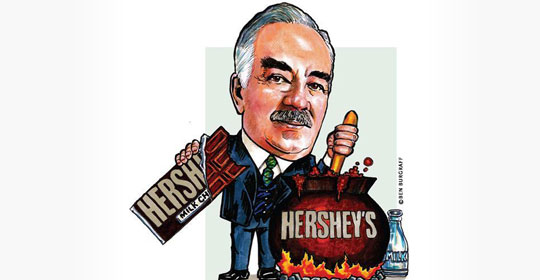 (Lessons From The Life Of Milton S. Hershey)

Hershey Chocolate Company is the 5th largest producing candy company in the world and the largest producer of quality chocolate in North America.  The Hershey Company has operations throughout the world and approximately 14,000 employees with revenues of more than $6.6 billion and offers confectionery products under more than 80 brand names.

However, the journey of this chocolate factory started with the determination of one man; Milton Hershey.  At the age of 18, he started his first candy manufacturing company as a small business in Philadelphia.  By the age of 30, his candy business had failed two times, but he did not give up. He went on to learn a new recipe for making caramel and with a loan from a local bank supporting small and medium scale enterprises, Hershey started another small business in Lancaster and this time he succeeded.

In four years, Milton’s caramel company had started shipping all over the US and Europe, employing 1,400 people as he became one of the leading manufacturers of caramel across the region.  He went on to discover a new recipe for manufacturing milk chocolate, which has become the hallmark of all Hershey Chocolates.

In our quest for Timeless Wealth, we must remember that knowledge once gotten remains yours forever except when or if you decide to discard it.

What was his legacy?

Even in his death, the Hershey Company continues the legacy of its founder; improving the lives of people.  His school: Milton Hershey School for orphaned children amongst other philanthropic acts have outlived him.

Also, the Company launched a program for farmers called the Hershey Learn to Grow program. Its aim is to provide cocoa farmers with advanced training in order to improve the quality of their cocoa, while doubling productivity and increasing farming income by 30%.  Last year, 20,000 Nigerian farmers benefited from this scheme.

People whose legacies have outlived them are not those who kept their wealth to themselves, but those who invested in the lives of other people.