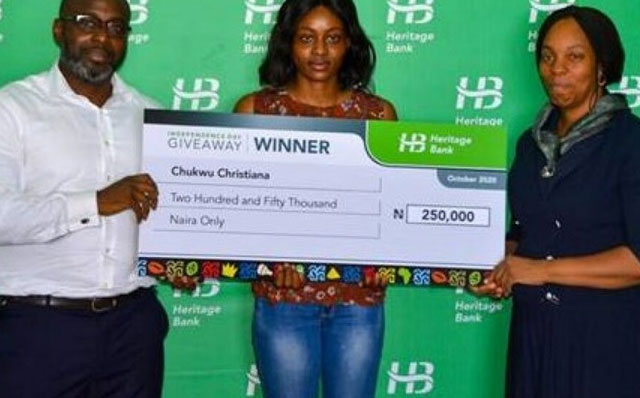 Heritage Bank Plc, Nigeria’s Most Innovative Banking Service provider has rewarded the winners of the rendition of the October 1st National Pledge in Pidgin English in celebration of Nigeria’s 60th Independence Anniversary.

The four patriotic Nigerians, who emerged as the winners are Idowu Ilesanmi (Lagos); Christiana Chukwu (Lagos); Onovo Chukwuebuka (Edo) and Paul Eze (Abuja) received cash prize of N250, 000 each. The bank slated an online competition for customers to make videos recitation of them presenting the “National Pledge” in Pidgin English and the four best videos were rewarded with total cash prize of N1million. This was to commemorate the independence and inculcate patriotic spirit in the citizens on the importance to reflect on the past, what led them here and the bright future that awaits Nigerians.

Speaking on the reasons why they participated in the online pidgin language competition, Ilesanmi, one of the winners said having being brought up in Benin City where Pidgin English is natural to them and adopted by all and sundry hence, it was golden opportunity to participate as a patriotic Nigerian. He commended Heritage Bank for the initiative, as Ilesanmi disclosed that the information of the competition was sourced from a colleague’s page owing to the fact that he was never a customer to the bank.

He advised that, young people should grab opportunities such as this which speaks to something they would do and get rewarded for. “Anyone who is interested in things that will encourage them to do what they have interest in, then Heritage Bank is where they should be,” Ilesanmi stated. Another winner, Christiana Chukwu also appreciated Heritage Bank for picking her as a winner and she mentioned being fascinated with the Bank’s online applications in the likes of HB Padie and *745#, which has made transactions easier and seamless to her and other customers.

In a statement by the Divisional Head, Corporate Communications/Product Management, Fela Ibidapo said that the bank considered use of Pidgin English as a marker of identity and solidarity, also as means to promote local content use of language. He affirmed that the importance of reciting the National Pledge in Pidgin English would help invoke in every individual their national pride of love, devotion and sense of attachment to out fathers’ land and alliance with every citizen who share same sentiment.

This attachment could be a combination of different feelings relating to the country in terms of socio-cultural, ethnic, political and historical interests. He reiterated, “We are not just excited, but we are also reflecting on what our commitment as individuals has been to our great country Nigeria. ooking inwards at our journey over the last 60years, we believe as an institution that this is the best time to reflect on the National Pledge and what it means to us as a Nation.” To this end, Heritage Bank championed the movement to keep our commitment as a nation by rewarding those who recited the “National Pledge” in various creative ways.