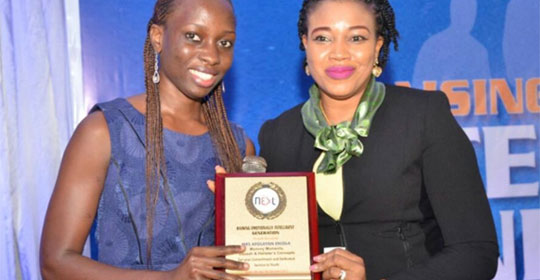 Speaking on the importance of savings, Mrs. Cynthia Erigbuem, Group Head, Market Intelligence and Analytics of Heritage Bank, noted that inculcating savings culture at an early age in children was very important because sometimes they might have ideas but if they had not put aside money, they would not be able to bring it to reality. She enjoined them to tell their parents to open savings accounts with Heritage Bank for them so that they would be able to save a significant amount of money before they would reach 20 years of age and thereby be able to bring their dreams and ideas to life. Erigbuem told the students that when they saved money with the bank, they would earn interest on the savings and the sky would be their limit by the time they come of age.

The convener of the programme, Mrs Olufunke Fajuyigbe in her remarks said the essence of Generation Next is to prepare the youths for a new Nigeria, remarking that the youths are the only people can make a new better Nigeria. She said they had specifically selected children in the age bracket of nine to 17 years, which is a critical age bracket for every country, adding that the colour, the picture and the greatness of the country depends on them and enjoins them to open their minds so that they can be the voice representing the next generation.

Also speaking, Professor Anthony Kila, Director of Studies at ECAPS in Cambridge, The European Centre of Advanced and Professional Studies, advised the organisers to hold the programme twice yearly, one for parents and the other for students in a bid to achieve the objective. Kila who said emotion denotes feeling, enjoined the students to understand the feelings of their parents and their own and break the bridge between them with effective communication. He said the most precious thing in life is information and this generation is the most privileged in the history of mankind because this is the first time that there is so much information available to the world. The professor promised the students that discerning ones among them would join other students in the world in Cambridge, the United Kingdom to write an essay on The Cambridge Experience, the role of the most emotionally intelligent people in the generation next and the winners would win the Anthony Kila’s prize of $300.

In his contribution, Mr Taiwo Kola-Ogunlade, Manager, Communications & Public Affairs for Google West Africa exposed the students to how they could use Google to obtain any information they needed on the internet and promised to expose five of them from the programme to the international community in the area of computer science. Miss Atiku Nafisat Emmanuella, a young legal practitioner, talked on purpose and leadership, remarking that purpose can be defined as the reason for doing a thing. It is the reason for existence and it is the reason any mission while the leadership can be defined as taking responsibility to solve a problem.