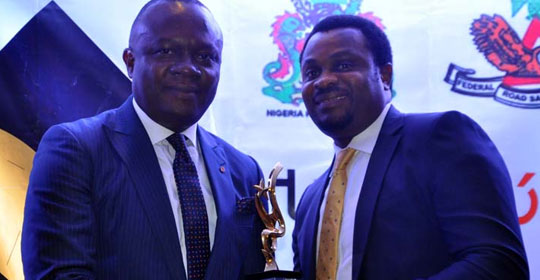 Heritage Bank Plc has once again proven to be Nigeria’s most innovative banking service provider, as Institute for Tourism Professionals, organisers of the National Tourism Transport Summit and Expo 2018 (NTTS), crowned Heritage Bank the best “Financial Institution, for Outstanding Support for Tourism.” The award, according to the organizers, was in recognition of the contribution of the bank to the growth and development of the tourism industry over the years.

Receiving the award on behalf of the bank at the Gala night in Abuja, the MD/CEO, Ifie Sekibo, who was represented by George Oko-Oboh, Regional Executive, Abuja & North, said it was a well-deserved honour for the bank, because over the years the bank had believed in tourism and had tried as much as possible to increase its support to the sector. He disclosed that the bank is partnering with stakeholders and plans to increase its investment in the sector in the years ahead.

Sekibo said, It is a well-deserved award for the bank because over the years the bank has believed in tourism and we always keep trying as much as possible to support the tourism sector. Over the years we think it is something we have done with a quite a number of stakeholders and we have done that quite well. In the coming years, we should expect more of better handshake. We intend to do more; because looking at what they are trying to achieve here now, we have seen that they are trying to take in much into the other sectors. We think we would still be there for them. The sector is quite lucrative, but for us, what we are doing basically is like a partnership. That is what we have done with them over the years. We have done quite a few investments in the sector.

Also speaking on the award, a member of the Local Organising Committee of the NTTS, Mr. Kayode Adesola, said several banks were selected for the honour, but Heritage Bank emerged the winner because of its unique approach and support for operators in the industry. He said, It is not as if the banks have given money to operators, but there have been some banks that have been of help to some of the players in the industry; like the travel agents, tour operators and others. In giving out this particular award, we consider the fact that banks such as Heritage Bank and a few others had been helping to facilitate smooth engagements in the industry. For instance, some the banks serve as guarantors; they give us bank guarantee to be able to cope with the requirement outside there to operate as travel professionals. There are several banks involved in these, but after some vetting by the committee in charge, they decided to give the award to the bank the cap fits, which is Heritage Bank in this instance.

Adesola, who is also the Vice President of the National Association of Nigeria Travel Agents (NANTA) Abuja Zone, stated that over the years, the tourism business in Nigeria had suffered many challenges and neglect, especially from government, mostly in the area of poor funding and poor infrastructure. However, he said the present administration, spurred by the support of financial institutions, had increased its collaboration with private sector players in the tourism industry. He said, now the government thought of partnering with us in order to synergise together and move the tourism potentials of this country to the next level. That is one of the reasons why we decided to put together the transport and tourism sector together because we came to realize now that the two have to work hand in hand.

He further called for increased support from financial institutions and governments at all levels, especially in creating enabling environment for operators to thrive. If government can just leave the private sector to run tourism and support us then I think the tourism sector in Nigeria would contribute more to the economy of this country, he noted.