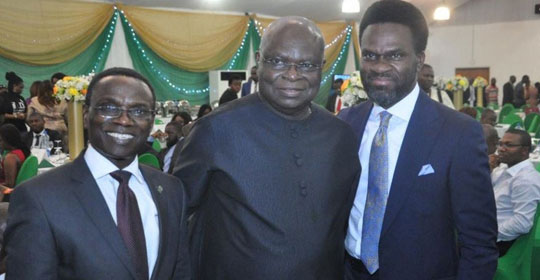 Heritage Bank Plc, Nigeria’s most innovative banking services provider, has again demonstrated its commitment to the growth and progress of the banking profession by partnering with the Lagos branch of the Chartered Institute of Bankers (CIBN) to host the 2018 Lagos Bankers & Stakeholders Nite.

General Manager and Chief Compliance Officer of Heritage Bank, Mr. Wumi Adeniyi, who disclosed this in a statement yesterday said the bank decided to support the Lagos Bankers Nite initiative because the event will foster a robust engagement among professionals in the sector as well as customers of banks. We take very significant recognition of the fact that we are a bank which must interface with our colleagues and customers at a time like this. It is a significant event in the calendar of the banking community in Nigeria and Heritage Bank, being a member of that community, must participate in it and we have supported the initiative over the years.

The guest speaker, Mr. Austin Okere, Founder/ Executive Vice Chairman of CWG Plc, in his paper entitled: Big data, Fintech and the future of banking, noted that the evolving technology which goes beyond financial application is expected to disrupt global supply chain by boosting transaction schemes across borders and improving the transparency of the process.  He said the technology uses the blockchain technology which has created the backbone of a new type of internet which was originally devised for the digital currency, remarking that it is this technology that Fintechs are leveraging to disrupt traditional banks.  He noted that the most disruptive application of the blockchain technology would be in the financial sector as consistent complaints about banks have reached a crescendo in recent times.  According to him, after centuries of receiving deposits and making loans, two customer groups have emerged, and both are calling for a change. The first group comprises of under-banked adults while the second comprises of members of the elite who believe that the relationship is absolutely skewed in favour of the banks. He said the biggest threat to banks is the perception that they can always make profits even in times of economic downturn when the real sector of the economy suffered the most. Okere contended that this has led many banks to believe that they are invincible, that is now characterised by loss of touch with customers. He said the way forward for the banking industry is to collaborate with Fintech companies to deliver financial services because Fintechs have taken over financial services up to a third percentage of the population in volume and in value in countries like Kenya and China.

Also speaking, the chairman of the occasion, Mrs. Foluke Abdul-Rasaq, a director with United Bank for Africa (UBA), observed that a strong banking system is imperative to the economic growth of any country. She stressed that the strength of the sector will depend on the confidence of its practitioners.

Earlier in his welcome address, Mr. Kola Abdul, Chairman, CIBN Lagos State Branch, reminded the audience that Bill Gates, the world’s richest man, once said in the mid-90s that banking is necessary, but banks are not.  Abdul said this sentiment has deepened among the population over the last decade with public opinion turning against banks. According to him, technology has begun to open a range of options in financial management following the financial crisis of 2008. He said Apple Pay’s Stripe is one of the companies revolutionising the way people pay for services in the world while digital currency and peer to peer lenders are opening new funding avenues for start-ups and SMEs.